Preparing Your Equipment for Pruning

Pruners should be the bypass-type, not the anvil-type. Bypass pruners cut by passing the sharpened flat blade past a bar. The other type, called an anvil pruning shears, is not preferred. An anvil type pruner cuts by pushing a sharp blade through a stem by pushing against the opposite side of the stem with a bar. The anvil type is not prefereed by reasoning that this pushing of the bar against the stem damages the stem where it is being cut. 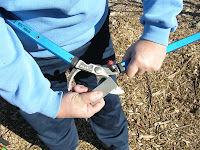 If you are doing alot of trees you might have to stop and "put an edge" on the blade (just a two or three slides across the blade). 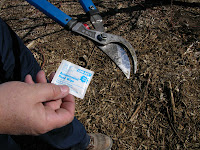 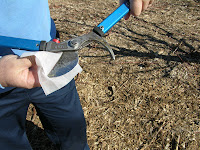 Now you are ready to prune.
Posted by Xtremehort at 7:40 AM No comments: Links to this post


We keep the size of all fruit trees so that the orchard is ladderless, easy and safe to perform work and harvest. This also allows us to plant trees closer together and get more fruit production in a smaller area. It also reduces our work load so we can get it done faster.


Initial pruning for size control can begin before leaf drop, usually in November when leaves are beginning to turn color and we are sure all tree growth has stopped for the remainder of the year. If you have only a few trees to lower then you can wait until after all the leaves have dropped. If leaves are hanging on even into December you can turn off the water to the trees for two weeks and then turn the water back on again. This will stress the trees moderately and accelerate leaf drop.

Trees heights are lowered to 6 to 6 ½ feet tall using vutually all thinning cuts. The tallest limbs are identified, followed visually down to a point of attachment around 6 feet off of the ground and lowered to the proper height with thinning cuts.﻿


Since we have our trees in rows, we must create space around each tree so that we can spray and harvest. We create space between trees by identifying limbs that are encroaching on a neighboring trees "space" or need to be removed so we can get between them. We trace these limbs back to a point of attachment (crotch) with another limb and remove it with a thinnning cut, not a heading cut.

Limbs that do not support fruit high enough to keep the fruit off of the ground or out of the reach of rabbits is removed with thinning cuts.

Posted by Xtremehort at 6:22 AM 3 comments: Links to this post

What Kind of Pruning Cut Do I Make?

Pruning Cuts. There are only two types of pruning cuts; thinning cuts and heading cuts.
Thinning cuts are made anywhere where two branches come together. The thinning cut totally removes one of the branches without leaving a stub. Thinning cuts result in a less dense canopy and less regrowth since terminal buds of the remaining stems remain after the cuts. New growth easily grows from the remaining terminal buds which helps minimize growth from side or lateral buds.

Heading cuts are made anywhere along a branch NOT at a location where two branches come together. Heading cuts result in several new branches at buds growing immediately below the cut since the terminal bud is removed. Heading cuts are used to shorten the past season’s growth to increase a branches girth. Heading cuts encourage the development of short shoots that support fruit called spurs in fruit trees that grow fruit on spurs. If you do not cut back too severely and you make the cuts at the right time of year (around July or August) you may be able to get spur producing fruit trees to produce fruit a year or so earlier. 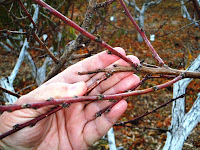 This growth resulted from a heading cut. Once the terminal bud was removed the side or lateral buds grew to replace it, fighting to see which might take over and dominate the new growth. The buds closest to the cut usually grow more erect (more straight up) than buds lower than this one. The lower buds tend to not grow as erect as the one closest to the removed terminal bud (the cut).


The most productive branches for fruit growth and development are at 45 degree angles above horizontal and should be preserved whenever possible. Branches are less productive as they are grow more vertically (more upright or downward). By the way, a branch that is at a 45 degree angle can be directed to be more upright and its growth will actually speed up (at the expense of fruit production, the energy goes to growth rather than fruit) and branches directed to be more horizontal will have slower growth (you can actually slow down its growth but it will still not put its energy into fruit production).
Posted by Xtremehort at 5:45 AM No comments: Links to this post


Open publication - Free publishing - More calendar
Posted by Xtremehort at 4:50 AM No comments: Links to this post

Sign up for this course at the University of Arizona if you have been wondering about raising fish in the same environment as a hydroponic greenhouse.

Open publication - Free publishing - More greenhouse
Posted by Xtremehort at 3:22 AM No comments: Links to this post

Which Roses Do Best in Hot Desert Climates?

Roses do well in the cool times of our hot desert Mojave Desert climate. They struggle during the heat but rebound nicely in the spring and fall months, about 7 to 8 months of the year. The lack of humidity and relative isolation helps keep insect and disease problems low. Here is a recommended list of roses from Weeks Roses, Inc., a top quality producer of garden roses.

Open publication - Free publishing - More care
Posted by Xtremehort at 3:16 AM No comments: Links to this post

This is a presentation I made to the South Valley Rose Society in Las Vegas, NV, on November 17, 2011.

Open publication - Free publishing - More control
Posted by Xtremehort at 3:10 AM No comments: Links to this post