What to Use on Vegetable Seedlings Decimated by Insects

Q. The day after I planted seedlings in my 4x8 raised bed I noticed they were decimated by some kind of insect. When I was amending the soil I noticed some small worm-like critters in the soil. I sprayed Bt but it evidently didn't do anything to help the situation. I was told to use a powder called "milky spore disease" to kill any grubs or grub-like insects in the soil. Have you ever heard of this product? They said it works and I only have to apply it one time. Can you advise me on this product and where I might find it or some other solution?
A. The milky spore product only works on Japanese beetle and a few closely related insects which we do not have in southern Nevada. It is a bacterium and works rather slowly, if it will work at all, on pests we have in southern Nevada.


Bt works differently. It works on those insects that mature or pupate into either moths or butterflies. So if the immature insect turns into a beetle for instance it will not work. So without knowing which insect is doing damage it is hard to know what will work.


The other alternative is to use a conventional pesticide approved for use on vegetables and has insect grubs or larvae on the label. These insecticides leave a poisonous residue for longer-lasting insect control.


This time of year Bt is a good product to use because it will control many of the insects causing damage right now. Look for products with a label that says Dipel or Thuricide. Forget the milky spore bacterium control in your case.


I am sending you a picture of what the cutworm larva looks like and its adult form, a moth. I will also post it on my blog. Bt can be sprayed on the soil and left undisturbed (no hoeing or irrigating after the application) for a few days but you have to repeat your applications to get any long term control.


This is the time of year that moths are flying, mating, laying eggs and larvae are out looking for food. Usual cutworm damage is at the soil surface, not on the leaves.
Posted by Xtremehort at 12:57 PM No comments:

Q. I have two cherry trees and one needs to pollinate the other. Can I plant both trees in the same hole so save space?  The trees grow to 20 feet and I will keep them pruned to a smaller size.


A. Yes, you can. Plant them about 18 inches apart, one on the east side and one on the west side of the hole. Try to pick varieties that are similar in vigor (how strong they grow) and on the same variety of rootstock.


I will warn you that sweet cherries are squirrely in our hot desert environment. They produce cherries in some microenvironments and not in others. They usually seem to do better in backyards that are somewhat protected (no strong winds) and have a more humid environment during pollination.


If you plant these two trees together, keep them occupying only half of the canopy. Do not let them compete with each other but keep them occupy their own, separate spaces. This means there will be a clear physical separation between the plants in their own half circle of canopy space. Also, do not let one get bigger than the other. Keep them pruned to a similar size.


These cherries must also bloom at the same time if they are to pollinate one another. Check your pollination charts to make sure they are compatible.
Posted by Xtremehort at 12:22 PM 4 comments:

Some Fertilizers Will Cause Staining

Q. I have a question regarding fertilizing.  My husband used a fertilizer that stained our pavers and the bottom of our pool in spots. Do you know of a solution to remove those stains?

A. The fertilizer most likely had iron sulfate in it. The spots would be dark reddish brown or brown. Muriatic acid would remove it. Be careful using it.


If it is in the bottom of the pool and water is in the pool there is not much you can do about that unless the pool was empty. The bag should have warned you, hopefully, to use a drop spreader if it was for a lawn.
Posted by Xtremehort at 12:15 PM No comments:

Plants Need to be Placed in Outside Environments with Care

Q. Last Christmas a friend bought for me a tiny pine tree about 6" tall. It is now 2' tall and I need to transplant it. When is the best time of year to do this?


A. It is April and getting too late now. I would wait and plant it some time between mid-September and mid-October as temperatures are cooling. However, if you run the risk of losing it, plant it now.


You don’t mention how you were growing it. If you were growing it inside, not outside, you will need to gradually bring it into the outside environment or it could go into shock. This is called plant acclimatization and requires about three weeks inside a garage or outside shade shelter and then planting it.
Posted by Xtremehort at 11:54 AM No comments:

Black Spots on Watermelon Leaves Could Be Several Different Insects 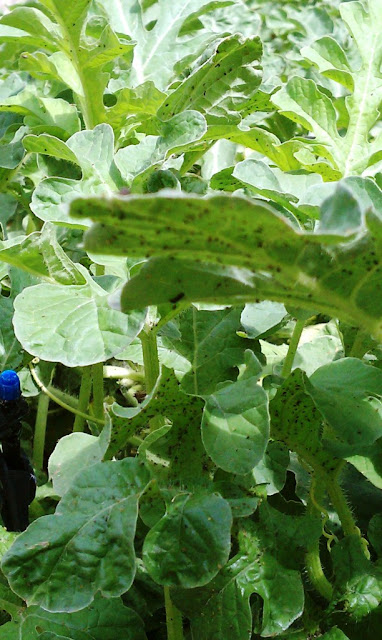 Q. I have attempted to grow watermelons for the first time last summer and everything was looking good until it got hot. These tiny black specks appeared on the back of some of the leaves.  I was told it was aphids but they weren’t sure.  I hope you can see them clearly from the picture I've attached. Should I use insecticidal soap as recommended or something else?

A. I tried to magnify the picture so I could see the black spots better. I was curious if these were in fact from insects or not. I could not see it clearly but whatever it was, it appeared that it was no longer a problem and the leaves seemed nice and healthy.


Aphids are cool weather insects and so when the heat hit they should have disappeared. The big insect problems for you on watermelon would be aphids earlier in the season during cool weather, squash bugs shortly after planting and whiteflies (during the heat).


Yellow sticky traps can provide a method to determine if whiteflies are a problem or not. I will post a short video on my blog on how to make these rather than buy them. They are handy to place in the garden for insect monitoring.


Soap and water sprays are good but must be done about every three or four days and the underside of the leaves must be sprayed as well. Squash bugs are nasty and can be vacuumed or hand-picked or delay planting by seed until after June 1. If you are hand picking or vacuuming squash bugs then be diligent for about three or four weeks and keeping the plants cleaned off every couple of days by hand until mid-June to avoid most of the problems with this insect.

Thanks to Garry Pearson, Lead Greenhouse Managerat UC Davis CAES,
Department of Vegetable Crops, during his presentations on greenhouses in Afghanistan.
Posted by Xtremehort at 11:45 AM No comments: