People think that all desert soils are the same. They are not. They are as varied as non-desert soils. Non-desert soils vary from dark chocolate brown and almost black to light brown chestnuts of the prairies. That brown color is a dead giveaway regarding the amount of organics in the soil, that is dead plant life that is rotten and you can't see it anymore. Just the color remains for the eye to see.

The soils in the Sonoran and Chihuahua deserts are vastly different from the Mojave. They are a better quality, they have more organics in them so they are a little darker brown in color, they are lower in salts, a little bit lower in alkalinity and they aren't as problematic as Mojave Desert soils. In other words, you are less likely to run into pockets of toxicity such as boron, sodium and chlorides. Why? The principal reason why is because of rainfall.

If desert soil was previously in agriculture; that is, irrigation water was applied and plants were grown in it, then of course the organic matter content of that soil will increase year after year until it hits a plateau. Maybe that plateau might be 1% or even 2% but a far cry from the one tenth of 1% found in many of the Mojave Desert soils.Following research performed in previously irrigated desert soils may not give you the same results as planting in raw desert soil.

This is the reason why some of the agricultural experiment stations in the desert come up with some different results when growing plants in desert soil. Knowing it is desert soil is not enough. You must also ask what the organic matter content is to get a good handle on how it will perform and how you must manage it.


Mix Organics Deep and Thoroughly throughout the Soil

Mix organic materials like good quality compost as deeply in the soil as possible. Remember, you will be growing root crops as well as asparagus which needs deep, well-drained soils. Rocks in these soils cause crooked carrots and crooked asparagus spears.The perfect soil for root crops is a Sandy loam with very few rocks in it.

For high-value crops and at high planting densities it is important to keep plants in separate areas from where people walk. One method is to use raised beds. The least expensive method is to create natural raised beds about three and a half feet wide without constructed side walls. It's easy to do and not expensive. Let the soil maintain the edges of the bed rather than wooden 2 x 8s.

Another method is to construct raised beds with sidewalls. Sidewalls can be made from anything but lumber is common. Soil for transplants and seed should be firm but not hard or soft. Walking on top of the raised beds, your feet should sink no more than half inch into the soil when finished. Settle the soil with water from a hose and sprayer. 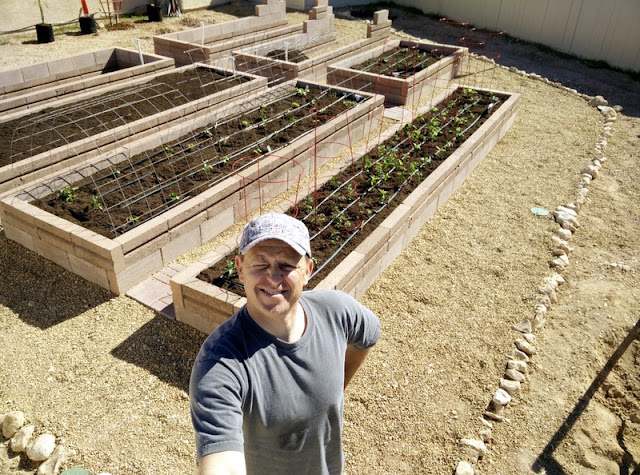 Posted by Xtremehort at 4:47 PM No comments:

Posted by Xtremehort at 6:29 PM No comments:

Desert Horticulture Podcast: Transitioning to Mojave Desert Landscape, Planting Plants in Containers in the Ground, Propagating Cacti from Pads and the Soil


Posted by Xtremehort at 8:45 PM No comments:

Posted by Xtremehort at 7:39 PM No comments:

Posted by Xtremehort at 6:02 PM No comments: