Reports from the weather station at the UNCE Orchard in North Las Vegas put the low temperatures on December 6 and 10 at 20F with daytime highs around the same as the inside of a refrigerator. I am sure this caused some damage to plants in that area. I posted the weather report on my blog for those interested.

Q. I believe I messed up with my one year old oleanders. I covered them with old cotton bed sheets and then plastic bags thinking it would protect them. When I uncovered them, the sheets were frozen with what I assume was condensation caused by the plastic bags. I’m hoping they survive as much of the lower foliage is still green and soft. What is my next option?

A. I don’t think you made a mistake. They just froze, that’s all. 9 times out of 10 they will come back in the spring. In fact the freezing bed sheet gave the oleander a few extra degrees of warmth.
Wait until spring and new growth before making any decisions. It is possible the oleander just got some leaf and the stem death with some of the stems still alive. You will not know until it starts growing again but I don’t think you lost them.
The degree of damage to a plant will depend on the plant itself, its variety and how it was cared for, weather prior to the freeze, landscape microclimate, the minimum temperature reached and the duration of that temperature. It can be really difficult to predict the degree of damage done for quite some time.
There may still be some cold coming later in the winter. Sometimes freezing temperatures in February, when plants are preparing for spring, can be much worse than the same temperatures in December or January.
Don’t prune them back just yet. Be patient and see what spring brings.
Posted by Xtremehort at 12:35 AM 1 comment: Links to this post


Q. We have a couple pyracantha bushes. We noticed this past summer some small, pen point sized, bright green bugs on the end of the branches. A day or two later I noticed ants in those same places but couldn't tell if they were eating the bugs or not. Please advise if we need to do something.

A. From the sound of it the bush had aphids, sometimes called plant lice, but summer is not the usual time that aphids appear. Aphids normally appear with new growth in the spring and disappear when it gets hot.
Ants are attracted to aphids because the aphids release sugary honeydew when they're feeding on the pyracantha leaves.
Ants “farm” the aphids, take this honeydew excretion and use it. So you may see ants traveling up and down the pyracantha gathering and transporting honeydew to their nest in the soil. Ants may even move the aphids around to new locations to expand their “herd”.
It's not a big problem if these are just aphids. The aphids will cause some stickiness on the leaves and may cause leaves to fall from the plant if the feeding becomes heavy. But that time of year I would not expect them to be a big problem.
If the problems is excessive the easiest thing to do is mix some soap and water, about as much as you would use when you would wash your dishes. Put it in a spray bottle and spray the soapy mixture directly on these green bugs, usually on the underside of the leaves.
You will probably have to do this every couple of days since soap and water does not leave any poisonous residue on the leaf surface and these spots will repopulate quickly after the spraying is done.
If you want more permanent control then you can use a traditional insecticide that has a label listing ornamental plants and aphid control. You can also treat the ant nest in the soil. Pouring boiling water on the ant hill will give some temporary organic control of the ants.
Posted by Xtremehort at 12:28 AM No comments: Links to this post

Tipu Sensitive to Winter Cold in the Las Vegas Desert


Q. We purchased 11 Tipu trees in March of 2012.  We purchased these trees because they were recommended as fast growing trees for our property. Three of the 11 trees we planted died during the winter of 2012-13 and only growing “suckers” around the base of the trunks.  An arborist told us the trees were “toast” and recommended we might leave the suckers to regrow into a tree rather than remove them. Is there anything else we can do to help these trees or do you think they are a lost cause? 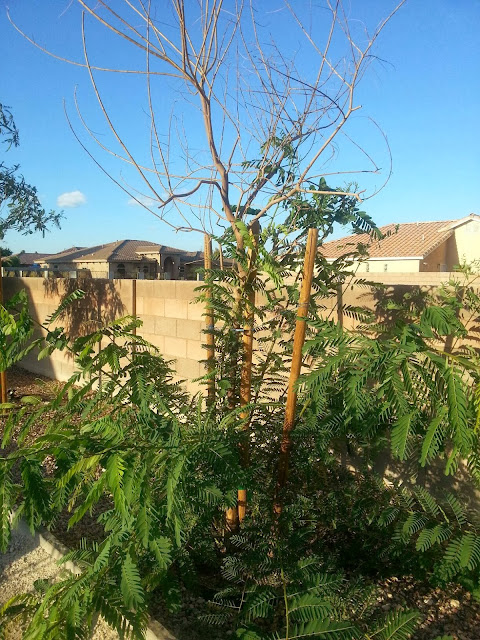 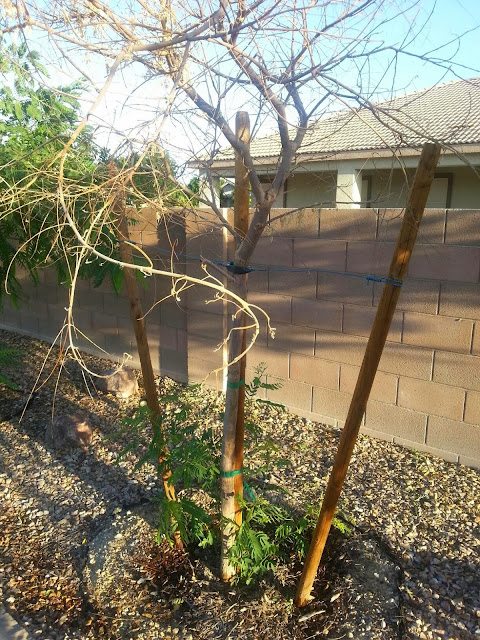 A. As you have already found out, this tree will freeze in our climate. This is what I believe killed the tops of your trees this past winter. According to Arizona State University it is hardy down to about 25°F. Temperatures below this cause winter leaf drop first followed by branch and trunk death as temperatures drop further.
What you are seeing now is resprouting of the tree from the base which was protected from freezing temperatures by the soil. If the temperature had dropped even further you might have lost the entire tree with no regrowth from suckers.
The arborist was right. You could select one of the stronger suckers and remove the rest. If you want a multi-trunked tree then leave three to five. These nurtured suckers will grow up to be a new tree that will promptly freeze to the ground again when temperatures drop to that 20ish F range.
I am not in favor of growing this tree here and I will tell you why. This tree is originally from South America where it can reach heights of 100 feet with a 60 foot spread. In our harsh, desert climate it won’t get that tall but might reach 40 feet or so.
In the wetter parts of California it has been used in water conservation landscapes. It is not a desert plant and should not be considered low water use and in the same category as acacias for instance. These trees should be considered moderate in their water use, similar to ash of a similar size.
In some places they are considered invasive and their root systems destructive. This should not be the case here if you plant them several feet from walls, sidewalks, driveways and foundations. Plus, you should water them infrequently, not with shallow frequent irrigations and irrigate on sides away from structures to less damaging root growth.
A lot of people in the warmer Phoenix area like this tree. There are a few who don't like the litter it produces and fear it's destructive potential. In a nutshell, because of its lack of cold hardiness, I do not believe it is suitable for the cooler climate of the Las Vegas Valley.
Posted by Xtremehort at 11:43 PM 1 comment: Links to this post

Bring Back Queen Palm from the Dead


Q. During the excessive hot spell in July our irrigation failed while we were out of town.
As a result, one of our queen palms lost all its branches. In spite of subsequent life support, it does not appear to be coming back. Is that too much to hope for? Is there anything we can do to help it recover or should we just mourn its passing?

A. Queen palms can handle heat but they struggle with extreme cold (25F) and hot, dry winds. In short, among the approximately ten palms we can grow here, they are not among the “chosen ones”. However, if these plants are water stressed or planted under poor soil conditions then they will not tolerate heat very well either.

The only places here where I have seen decent, older queen palms has been in areas protected from wind, the soil prepared adequately with amendments and the use of organic surface mulches.

Once they are stressed and water is withheld, they will suffer greatly. They need adequate soil preparation at the time of planting, good drainage, protection from winds and low temperatures, an annual fertilization program and organic surface mulches.
Posted by Xtremehort at 11:09 PM No comments: Links to this post

Pohutukawa Tree: Maybe a Kiwi Can Help Out

Q. I would like to purchase a Metrosideros excelsa ( Pohutukawa) Tree and would like to know if it can survive Las Vegas hot climate.

A. Well you have me on this one. This is the first question I have ever had on this tree. I had heard of it but never had read anything much about it and of course have no experience with it. So, all I can do is what I have done which is read as much as I could find out about this tree and how it has handled similar climates.

Maybe if there are any Kiwis reading this post from down under they can respond. But keep in mind the Las Vegas climate is DESERT, with summer temperatures reaching over 45C (115F+) very low humidity and soils that I would describe as "moon dirt", structureless, high in salinity (but manageable most of the time) and winter lows of -8C ( below 20F for brief periods of time in the morning hours).

First, there are no postings I could find from anyone in a desert climate trying this tree. We do know that it will handle temperatures down to about 20F ish…, it can be found growing naturally on very rocky soils in New Zealand, usually close to the ocean. So in the US it has been grown successfully along the California coast, mostly in northern California and up into the Pacific Northwest. So know this about the tree and some other things stuck in my head from my reading I would say the following.

It is worth a try provided you can plant it in a place out of dry, desert wind, a bit protected from cold such as closer to town and really improve the soil at planting time. What I would expect from this tree would be that it will have some problems. Namely, it will probably never look as good as it does in coastal climates. The leaves will probably have a tendency to scorch and damaged by wind. It may also tend to get yellow due to a lack of available iron so I would be giving it an iron fertilizer annually. It will not like a desert landscape so if it can be planted in a lawn you will be better off. Expect it to dieback during some winters with very low temperatures. The degree of dieback will depend on the part of the valley you live and how well it is protected from winter cold and winter winds. Expect with these diebacks that it will tend to want to be more shrubby than tree-like. It can be easily started from seed.

That is my best shot at it.
Posted by Xtremehort at 10:51 PM 1 comment: Links to this post