Viragrow Delivers! : Mulch and Sprays Reduce Black Fruit Rot on Tomato: Q. I planted tomatoes in late feb. in  my raised boxes..The cherry tomatoes have been doing great.. producing almost more then I can handl...

Posted by Xtremehort at 5:29 AM No comments: Links to this post

Water Every Day and Still Not Enough

Q. I put four African sumac trees in our backyard last September. I am watering them now every Tuesday, Thursday and Saturday for 20 minutes. About two weeks ago the leaves turned brown and fell off. If this continues will the tree lose all its leaves?

A. You can be watering newly planted trees and they can be suffering from drought at the same time.
Container and boxed trees are grown in soils that are totally different from the soils in the landscape. Container soils are looser and lighter than landscape soils.
When these trees are planted, the soil is pushed in around the root ball and, if you are lucky, the plants are watered in twice with a hose. A basin is placed around the trees so they can be given additional water until they are established.
Irrigation emitters are sometimes placed too far from the trunk and the water from the emitters wets the landscape soil but it does not move into the root ball because the soils are totally different from each other.
How to correct this? Always, always, always water newly planted trees and shrubs with water from a hose directed on top of the soil and at the base of the tree. Never, never, never rely on an irrigation system by itself to deliver the water where it is needed after an installation.
Hand water with a hose twice a week. Supplement the water from the hose with your irrigation system on the same days you water by hand. Select your irrigation days and give the plants a rest (no applied water) for one or two days between irrigations.

Posted by Xtremehort at 9:42 PM No comments: Links to this post

Why Apricots and Early Peaches Were Bland This Spring

Our spring this year was cool and wet. Even our early summer was that way. This kind of weather was good for producing a lot of tomatoes but not necessarily for high-quality tree fruits.

Early apricots and even some peaches can be harvested in mid to late May in our climate. The best early-season fruit bright, sunny skies and warm temperatures. This year our skies were overcast and temperatures were cool all the way into May.
Temperatures below 95° F are great for setting tomato fruit but not necessarily the best when it comes to producing high quality tree fruit. The taste of fruits is complex. It isn't just about sugar content. Devices like refractometer
s only measure total soluble solids which can be equated with sugar content. Sugars only provide sweetness.

We need other tastes to provide a good flavor profile to fruit. Flavor begins with a balance between sugars and acids that we find favorable.This includes a mixture of organic acids such as acetic, tartaric and malic acids to balance flavor and aromatic volatiles that provide that first whiff of the fruit even before it enters our mouth.
Cool temperatures and cloudy skies do not promote good sugar development. Under these conditions sugar content stays lower than normal and the acid content remains high. So the ratio of acids to sugars is not the best. When we have bright, sunny skies and warm to high temperatures then sugar content is boosted and the ratio of sugar to acids becomes delicious.

The only other thing we need to make this a perfect fruit is to allow it to mature so that those volatiles fill our noses. This is why when I shop for fruit I use my nose before I buy it. You can smell good fruit before you taste it. Ask any fruit loving bird.
Posted by Xtremehort at 6:47 PM No comments: Links to this post

Some thin barked trees and shrubs will get sunburned if they don't have enough protection from strong sunlight.

Plants that typically get sunburn include many of our fruit trees, mostly peach and apples. Ornamental trees and shrubs also get sunburn. I get a lot of pictures of sunburn sent to me with sunburn and include Japanese blueberry, locust trees, ash trees, Indian Hawthorn, and others.

The natural way to protect these plants from sunburn is to allow these plants to shade their own trunks and stems with leaves. Not providing enough water can thin out the canopy of trees and shrubs and encourages sunburn.

Having rock mulch around plants that do not like rock mulch also reduces the number of leaves and increases the chance of sunburn. Plants that do not like rock mulch, like the ones I mentioned above, will develop an open canopy, leaf loss, and sunburn.
What's the problem with sunburn? When we get sunburn we recover. When plants get sunburn, particularly in a desert climate, they frequently decline and die. Attack by boring insects, or borers, is the first phase after sunburn. The borers create more damage and more leaf loss and more sunburn. After that, the plant falls into a death spiral.
Use surface mulches particularly wood chips and not bark. Don't water trees and shrubs daily but water them two or three times each week during the heat of the summer. Reduce the number of times per week during the cooler months. When you do water, give them adequate amounts so that the soil is wet to at least 12 inches and preferably 18 inches.

Posted by Xtremehort at 6:28 PM No comments: Links to this post

Email ThisBlogThis!Share to TwitterShare to FacebookShare to Pinterest
Labels: borers, damage from the sun, sunburn

Do you love gardening and want to share your experiences?

The Master Gardeners of Southern Nevada will hold registration on Wednesday, June 22 at 9 a.m. We will give you an overview of the training and program requirements, and offer you the opportunity to fill out an application and have an interview with a current Master Gardener.  Students will be notified of their acceptance by June 30. Payment of class fees ($200) will be due by July 8.

Our mission is to train community volunteers in appropriate desert gardening practices. Eighty hours of class training and 50 hours of volunteer work on approved projects are required in order to become a Master Gardener. Classes are scheduled on most MWF from 8:30 – 12:30 from September 9 through October 26 (based on instructor availability). You must attend all 20 classes. Classes are held at Cooperative Extension, 8050 Paradise Road, LV 89123 (Windmill exit off the 215)

You do not need a gardening background in order to become a Master Gardener! The most important qualifications are commitments to complete the Training and to share your knowledge through Volunteer service.

Contact Lori Leas at leasl@unce.unr.edu to reserve a space. Please indicate the registration date of your choice. Full details will be emailed to all who pre-register.
Posted by Xtremehort at 6:06 PM No comments: Links to this post

Q. How often and how many minutes of water should I give my pine tree?

A. Regarding your pine tree, it will do best if you can give the tree lots of water all at once very slowly and then hold off on your watering.To do this, it is sometimes best to construct a basin around the trunk 2 to 3 feet wide to hold the water.
Because of how irrigation systems are designed, sometimes you can reschedule your irrigation clock and sometimes you cannot because it's tied to other plants and their watering schedules. If you can hold off your watering to twice a week it would be better for the plant.

Browning on Apple Tree Is Drought

Q. see (photo) my apple tree it is not in good condition, why? Can you tell me what I can do to help my tree? 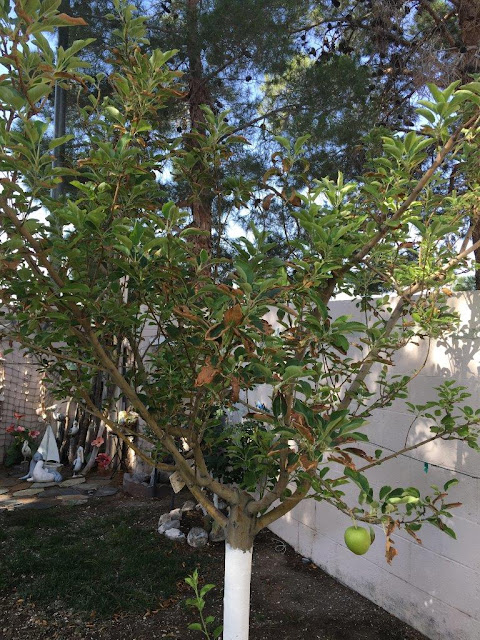 A. Thanks for the picture it helped. That is leaf scorch and leaf scorch is caused by not enough water making it from the roots to the leaves during hot dry weather usually. A lack of water getting to the leaves can be caused by soil problems such as too much salt in the soil, a lack of water in the soil, root damage, damage to the trunk so it transports less water or damage to limbs which does the same thing.

When leaf scorch appears all through the tree canopy then we can pinpoint the trunk, roots or soil. In your particular case I think it is just a lack of water around the roots. The tree appears healthy otherwise. Take a hose and soak the area under the tree canopy with about 30 gallons of water. Repeat this again twice during the week.

The leaves which are already damaged will not recover. But any new leaves produced after you begin this new irrigation should come out without scorching.

Posted by Xtremehort at 6:01 PM No comments: Links to this post

Geranium and Petunia Damage on the Rise

Q. I had a beautiful  Geranium plant with lots of flowers in a large pot that has a dripper. Now that the blooms have died all the leaves are turning brown and  have holes in them. What went wrong? If I cut the plant back, will it bloom again.

A. Two things come to mind without looking at the plant, the soil or container. First of all, geraniums are cool weather plants and don't like the heat. If they are going to survive during the heat they need to have an Eastern or northern exposure which is protected from late afternoon sun. They do best in bright locations that have filtered shade.

It is possible to cut them back, fertilize and water them and get them to regrow but you should spray for the tobacco budworm to protect the new blossoms. If you have petunias, they can attack them as well.

Posted by Xtremehort at 5:30 PM No comments: Links to this post