What? No apricot fruit?

Q. I have Katy and Blenheim apricots that are supposed to be low chill and self-pollinating but they barely produced any fruit the last two years. Three years ago both trees had a large amount of fruit. The trees seem to be healthy and there were plenty of bees.

A. Both of these types of apricots are older varieties and excellent producers in our climate. They are both self-pollinating and do not require much winter chilling temperatures to produce fruit.


You didn’t tell me if you saw flowers or not. The presence of flowers and no fruit is a big clue as to what may have happened. I am guessing you had lots of flowers but no fruit.
My guess is it was due to freezing temperatures during February. Apricots will flower during the first couple weeks of February. Last year there was a late freeze that could have eliminated apricot fruits in parts of the Valley where cold temperatures accumulate.


When fruit trees are near flowering, in flower or they have set small fruit, then these fruit buds/flowers/small fruit will tolerate temperatures from 32 to about 30° F. Nothing lower than this.
Too much shade from neighboring trees can eliminate fruit production in all but the sunny locations of the tree, usually hear the top or exposed sides.
You didn't mention pruning. If anyone pruned these trees and removed small side shoots from branches then there will be no fruit. Fruiting spurs are small side shoots going from branches. Fruiting spurs are needed on apricot for fruit production.


So unless someone pruned out the fruiting spurs or there was a late freeze this year, you should have plenty of apricots.
Posted by Xtremehort at 7:34 PM No comments:

Email ThisBlogThis!Share to TwitterShare to FacebookShare to Pinterest
Labels: apricot tree and no fruit, Why did my apricot not produce fruit

Ash Roots Can Be Removed with Care

Q. I have a 15-year-old ash tree in my backyard and roots are pushing up the brick walkway. Would it hurt the tree if I took up the brick and cut the roots off before they grow under the brick? The walkway is about six feet from the tree.

A. It shouldn't be a problem that far from the tree but let me tell you how I make that determination.
I look at where water is being applied to the tree. Tree roots will grow toward water. They will grow more aggressively where there is more water and fertilizer. They grow less aggressively in and toward dry areas.


Cut the roots in that area which are growing to a depth of 12 inches. After cutting them, sanitize the cut ends of any large roots that have been cut with soap and water. Let the cut ends of the roots dry and heal for a couple of days before putting soil back around them. There are some plant diseases present in soils that can enter the tree through open wounds. Sanitizing the cut ends and letting them heal first helps prevent these diseases from entering the tree.


Backfilling around the cut ends of roots while cuts are still fresh can increase the likelihood of disease problems.
Posted by Xtremehort at 7:30 PM No comments:

Email ThisBlogThis!Share to TwitterShare to FacebookShare to Pinterest
Labels: how to cut roots, How to remove Ash roots

Q. A few weeks ago I cut my ornamental pampas grass down, removing all last year’s dead growth. As the new growth is starting, I noticed a peculiar brown, circular pattern in the center that hasn't happened in the past. The new growth is coming along fine; nice and green, and a couple inches taller. Just nothing in the center.
A. This brown center is common to many ornamental grasses as they get older. When the plant is very young and juvenile the entire plant is green, even the center.
As these plants get larger, they grow from outside shoots, or tillers, that make the plant larger in diameter. Each year this clump of grass gets larger and larger with the brown interior getting larger as well.
When these ornamental grasses get larger, the entire clump is dug up and divided into several smaller clumps. This propagation technique is called “division”. The brown portion of the plant is removed and the smaller plants are replanted or containerized and sold as a juvenile plants.


However, the new growth of your plant will cover up the dead interior and I don't think you will notice it anymore until you cut back again.
Posted by Xtremehort at 7:27 PM No comments:

Whitewash Not Meant for Stopping Rabbits

Q. I planted a couple of fruit trees and a visitor started chewing on it a bit, possibly a baby rabbit.  What should I treat it with or should I just paint it now with whitewash such as a 50/50 mixture of latex paint and water? I read this mixture stops rabbits from chewing on them.

A. I would strongly suggest you protect these trees from rabbits by putting a 2 foot tall cylinder of 1 inch hexagonal chicken wire around the outside of the tree. This excludes rabbits from chewing on the trunks.


Once the trunks get about 3 inches in diameter rabbits will no longer bother them and it can be removed. Be sure to bury the bottom edge of this cylinder one or 2 inches into the soil.
I don’t know if whitewash will prevent rabbit damage. The major reason for applying whitewash is to help prevent sunburn to the trunk and limbs of young, and even older fruit trees susceptible to sunburn. Fruit trees particularly susceptible are peach and nectarine.


Whitewash years ago was made from a mixture of lime and water. Now most commercial whitewash is made from diluted white latex paint. I recently purchased some commercial, ready to use whitewash and I still found it needed more diluting with water.
You want a mixture of water and latex paint that changes the color of the bark from brown to a very light color. This better reflects sunlight and reduces damage from sunburn.


I have never heard of it used to deter rabbits so in my opinion it is strictly folklore unless it can be validated by others. There is a lot of anecdotal information floating around out there that is not very accurate but simply passed on without any proof.
Posted by Xtremehort at 7:24 PM No comments:

Email ThisBlogThis!Share to TwitterShare to FacebookShare to Pinterest
Labels: how to make whitewash, the purpose of whitewash, Whitewashing fruit trees

Spraying Oil on New Fruit Trees Not a Bad Idea

Q. Should you spray fruit trees with horticultural oil if you are planting them for the first time?

A. Horticultural oils are made from refined mineral oil and used during cooler times of the year to smother insects that might cause problems to a number of different plants. Even though horticultural oils are “natural” they are considered an insecticide since they kill insects by “smothering” them. They are most effective on aphids, scale insects, whiteflies and spider mites. 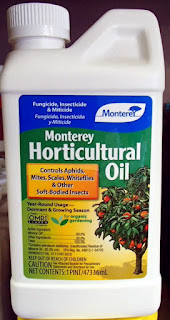 No, you don't need to spray newly planted trees with horticultural oil when planting them unless you think they were infested when you bought them. However, it is not a bad idea and probably a good safety precaution since these trees are coming from places where there are usually a lot of new insects that can be brought into your garden.
Posted by Xtremehort at 7:20 PM No comments:

Heavenly Bamboo/Nandina Yellowing and What to Do

Q. I noticed all my Nandinas, also called heavenly bamboo, are turning bright yellow. Is this a fungal disease problem? I'm worried that whatever this is will spread to all the other plants. 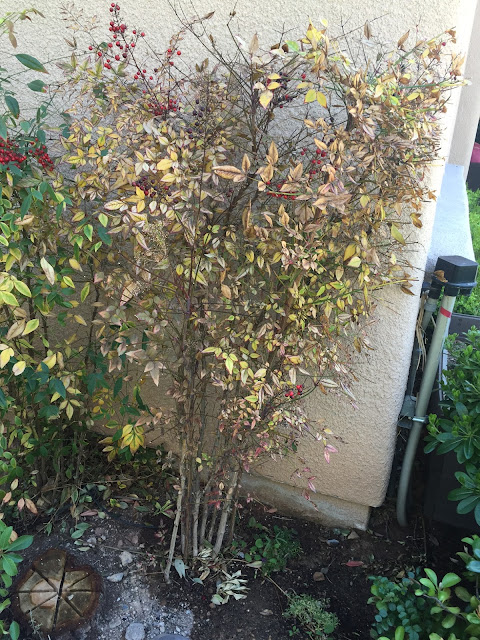 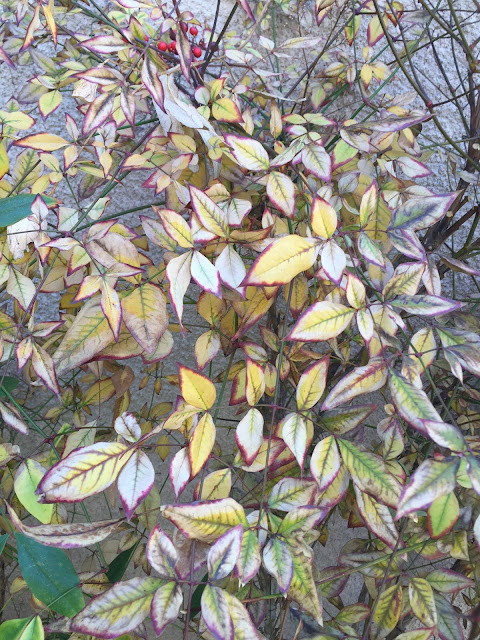 A. No, it is not caused by a disease organism. This is severe iron chlorosis and fairly common to heavenly bamboo growing in alkaline and desert soils.
Leaf yellowing happens frequently because of a lack in organic matter in the soil, increasing alkalinity or soil pH. I see heavenly bamboo planted with rock mulch and this yellowing frequently becomes a problem in a few years after planting in these situations.


Start a program of soil enrichment and add a good quality iron product to the soil now as new growth is appearing. If there is rock mulch present, remember this type of mulch is probably adding to the problem. Plants like Nandina do not like rock mulch but grow healthier in a wood mulch environment. 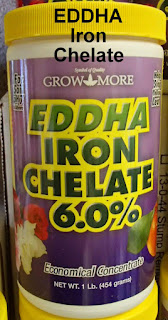 Personally, I prefer iron EDDHA chelate as the source of iron to apply to the soil. It is a dry powder and must be watered into the soil accompanied by a good quality fertilizer.


Iron does not move from the soil into leaves that are already yellow. Iron applied to the soil only affects new growth and new leaves. The only way to improve the green color of existing yellow foliage is to apply iron fertilizers as a foliar spray.
Use any of the iron foliar fertilizers (liquids or powders that are mixed with water to make a liquid) and sprayed on the leaves. Sometimes it can take three or four applications, a week apart, to get them to green up adequately. Some plants green up with a single application.
The water used when spraying liquid iron should be distilled water. If using tap water, adjust the pH of the water to 7.0. When making applications to leaves always use a wetting agent such as EZ Wet.


You can also improve the new foliage to dark green by pruning them back, close to the ground, and letting them regrow after you apply iron EDDHA, compost, water and a fertilizer.
Posted by Xtremehort at 7:15 PM No comments: 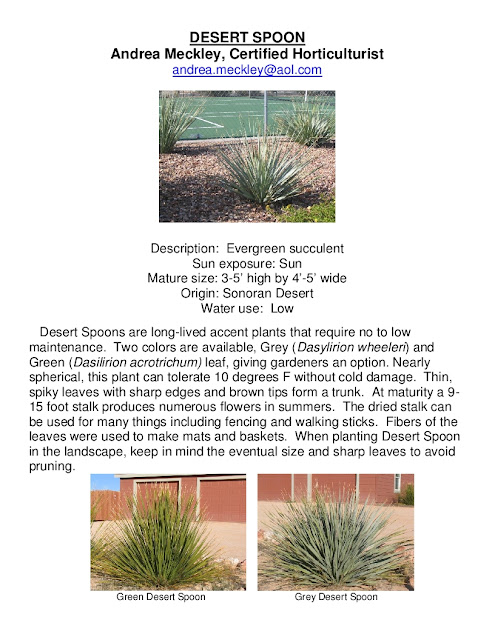 Posted by Xtremehort at 7:07 PM No comments: