Can Sago Palm Grow in the Hot Desert?

A. Sago palm or cycads will perform better with less care if they are planted in eastern or northern exposures rather than southern or western exposures. They will survive in your spot but will not look their best.
They will grow in full sun and under some very tough desert conditions if the soil is improved, they are receiving the right kind of irrigation and fertilizer and surrounded by wood mulch.
When grown under these very harsh conditions they usually grow shorter fronds, the fronds are frequently discolored with a yellowish or bronze appearance and the fronds may even scorch or burn at the tips.
When these plants are grown in more protective environments they look much better with more succulent growth, longer fronds, darker green with a lot less care. It would be incorrect to say they will not grow under some very harsh conditions but they will perform better and with less management in less hostile environments.


Will it survive with rock mulch in an intense desert environment? Sometimes. But it will not have a long life expectancy and not look as pretty. Under rock mulch conditions with very little soil improvement I would give them 5 to 10 years looking okay after they were planted.
Posted by Xtremehort at 11:43 AM No comments:

What is Causing the Webbing in My Desert Willow

Q. My desert willows in Kingman, Arizona, are being eaten up by worms. The web-like pods are all over the branches, but I have not found anything inside. I certainly do not want to spray as the trees are over one of my gardens and close to some windows.

A. I did some quick checking but could not find this critter mentioned anywhere. How do you k now they were being eaten up? It is possible they have done their damage and now have moved on leaving their webbing behind.
Desert willow is used in butterfly gardens but it is usually for the adult butterfly rather than the immature larva (worms) or caterpillar. If they are causing a great deal of damage then they should be controlled.
Worms or caterpillars that do cause damage to desert willow are the Sphinx moth larva or “worm” and relatives of tent caterpillars. The larva of the Sphinx moth is gigantic with the horn coming off of its rear end. You would've recognized that one if you had seen it.
The other caterpillar is much smaller, along the sizes you're talking about, but they usually form a webbing one or 2 feet across and they feed inside this webbing or tent. That's why they call these “tent caterpillars”. Tent caterpillars reproduce quickly and do a lot of feeding over a short period of time.
My guess is that these critters will not last very long and be on their way for the season. The desert willow will respond and survive. But in the meantime that tree will have some damage.


You could use a spray of BT, called usually either Dipel or Thuricide which is an organic control. It will only target “worms” that become moths or butterflies. Also Spinosad will work as well. This way you could avoid more poisonous conventional sprays.

Use Five Gallon Buckets in Place of Drip Irrigation

Q. My pine trees are over 20 years old and very tall.  I looked on the net and found a YouTube video out of Kansas showing a man using a 5 gallon bucket with a pin hole in the bottom for the purpose of watering them. I called my landscaping guy and he said that I am wasting water by watering that way.  Am I doing right by watering with buckets or is he correct about this method?

A. Using a bucket with a small hole in it works just like drip irrigation as long as the holes is small enough that it lets the water out very slowly. Using buckets is similar to the very first form of drip irrigation which was sinking unglazed ceramic pots into the soil. 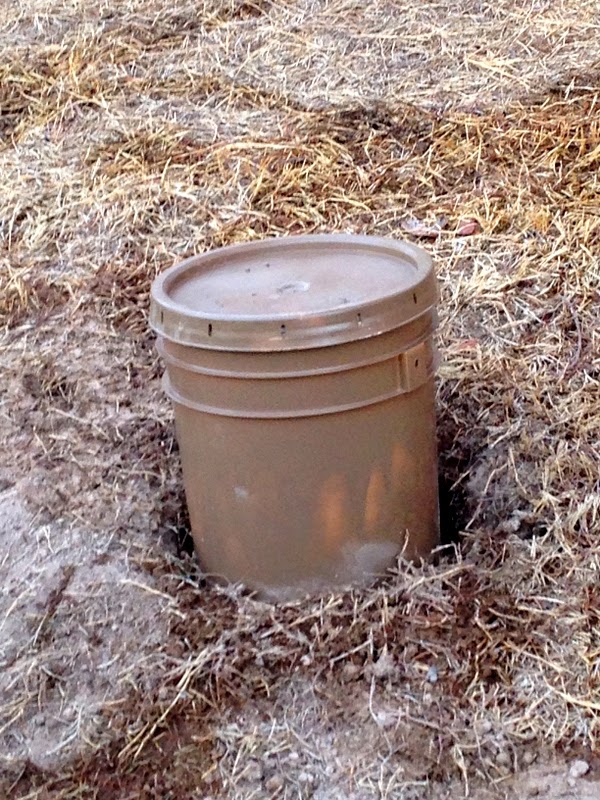 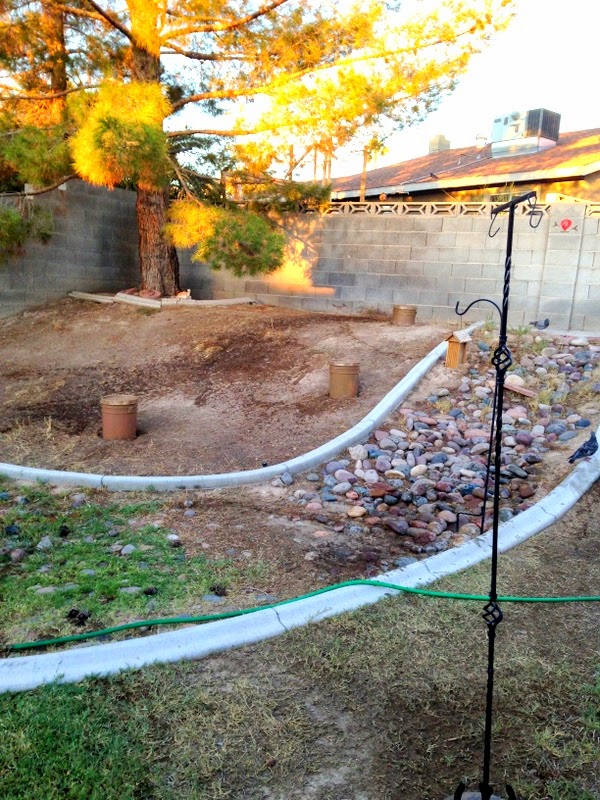 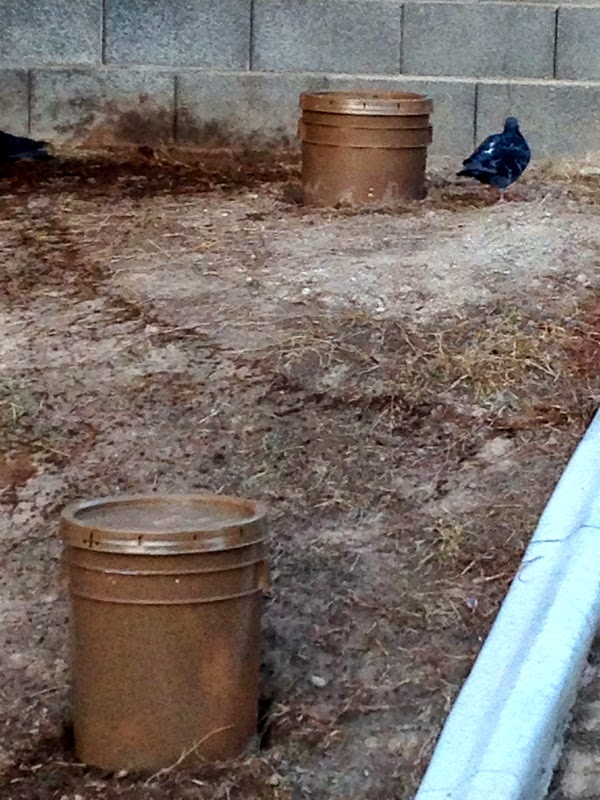 You will have to fill the buckets two or three times each time you water to get the water deep enough in the soil to encourage deeper rooting. Don’t water again for about a week at this time of year; less often in winter and maybe twice a week in the heat of summer. Deep watering helps avoid the development of large surface roots that can heave sidewalks, driveways, walls and foundations.
This type of system accomplishes the same thing as a drip system but with more work on your part and will be kind of ugly. But it will work. I would use about five or more buckets distributed under the canopy, about three or 4 feet apart. The more buckets, the better.
The buckets are not made with UV treated plastic so you should paint the buckets or cover them so sunlight does not destroy them.
Make the holes small. Five gallon buckets should run out of water in 30 minutes to one hour. The hole will eventually become plugged so you must clean it periodically. Use clean water a clean bucket and make sure you put a lid on top.
Place the buckets on top of the soil or slightly buried. You don’t want to bury the buckets totally in the soil if the water is emptying from the bucket at the bottom. Most of the roots that take up water will be within the top 12 to 18 inches of the soil. If the bucket empties beneath this zone, the water will be released deep and not water the roots very well.
In urban desert landscapes, trees should develop two types of roots; roots that anchor the plant and keep it from blowing over and roots that take up water and nutrients quickly.
If trees planted in the desert are irrigated deeply, they will develop deep roots which will help anchor the plant in the soil. If they are not watered deeply but only receive shallow irrigations, they will not develop these deep roots.
You can also help the tree get additional water by planting other shrubs under its canopy and overwatering them slightly to provide additional water for the tree. Surface mulch helps conserve water and encourages deeper rooting, particularly wood mulch.
Posted by Xtremehort at 11:31 AM 3 comments:

When and How to Prune Mock Orange

Q. I would like to cut back my dwarf mock orange. When can I do it and how much can I cut back without harming the plants? I am hoping to make them healthier. The back plant gets less sun.

A. This is the mock orange of the desert Southwest, not the mock orange of northern climates. The common name of mock orange pertains to a couple of different plants.You won't be able to cut them back very much because the leaves are only on the outside couple of inches of the canopy. Once you cut beyond this layer, it's just a bunch of twigs and sticks. These twigs and sticks are alive and will produce new growth but it would be very unsightly until it grows back.
These plants grow very slowly so they will not come back quickly. If you decide to cut them back I wouldn't do it until late next spring when plant starts growing again and there is less time to look at a bunch of twigs and stems.
You can cut them back in late spring and open up the plant and you will see new growth coming from stems and branches that receive full sunlight. It might take a couple of months for them to start to fill in again. They are that slow.
Regarding the browning of the leaves, If you are going to cut them back I would pull back the rock from around them and put down some compost and wood mulch. They will do better in an amended soil.
I would then increase the irrigation so that it wets that area more and fertilize them with a tree and shrub fertilizer just after you prune them back.
Posted by Xtremehort at 11:14 AM No comments:

Causes for Yellowing of Mock Orange

Q. Can you tell what is happening to my mock orange shrub?  They are 3 to 4 years old and getting enough water. They were planted in topsoil used in other locations with good results. They are the fourth different plant I tried to grow in this area without good results. The leaves are turning brown starting at the tips. 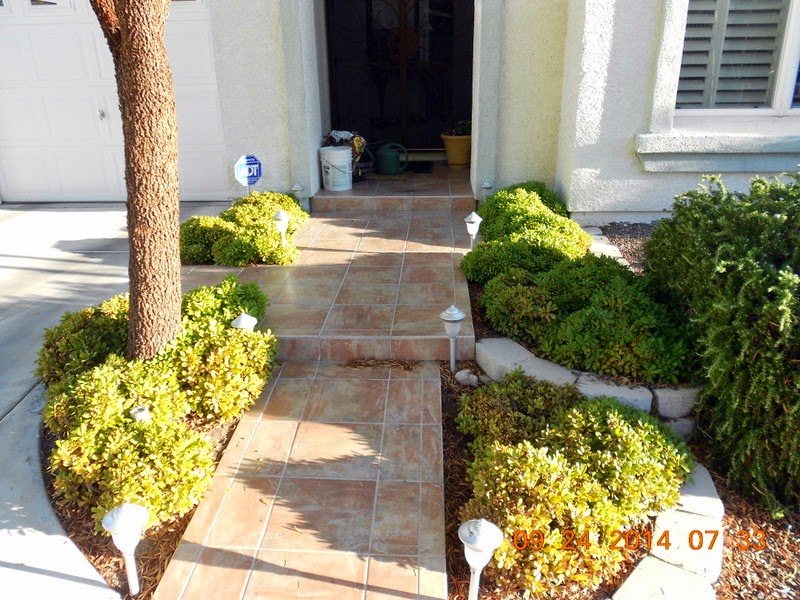 A. From your picture the leaves scorching like that could be not enough water applied or not applied frequently enough or even too frequently; high intensity sunlight and intense heat from surfaces radiating heat back to the plant; using a poor soil amendment at planting; lack of fertilizer or a lack of an iron fertilizer because the leaves are yellowing.
These problems can be working alone or in combination with each other. If just one of these problems is present, it can affect the overall ability of the plant to combat extreme desert conditions such as high temperatures, low humidity and poor soils.
Mockorange is not a desert plant to begin with so we have to put more resources into keeping it look good. It’s one of those plants that does well if it is in the right location with the right type of soil amendments and irrigation.
Address the potential water issue first. I would flood the areas with a hose once a week in addition to your normal waterings. Make sure you are not watering daily but every 2 or 3 days right now.
Add good quality compost to the area. This can be on top of any mulch you have and water it in. Fertilize with a good quality fertilizer such as Peters, Miracle Gro or Osmocote. Add soil iron in the form of iron chelate, use only EDDHA iron chelate if applying it to the soil.


Water thoroughly giving the plant roots a chance to breathe and the soil to drain between flooding. Look for improvement to the plant the following spring (February to May). It is too late in the season now to see much improvement in growth.
Posted by Xtremehort at 11:07 AM No comments: