April is the Time to Treat for Agave Weevil 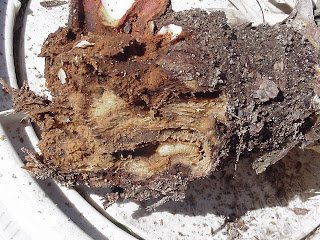 Q. I have a question regarding 'grubs'. We lived in Texas where we had grass and were accustomed to grubs, but we are experiencing them here. We were dumbfounded and unprepared for grubs in the desert. We have lost several very mature cacti to grubs. I purchased grub control chemicals and have followed instructions but still seem to have them. Is it normal to have grubs here? Are there specific plants they zero in on? Can you recommend what we should use?

A. There are many different types of grubs so when we speak of grubs we have to be certain about which grubs we are referring to. Commonly we find grubs in lawns (white grubs, aetenuis beetles), in compost or decaying organic matter (June bugs), grubs in some cacti such as agave (agave weevils), and others.

Green June beetle life cycle
In cacti it is usually the agave weevil which prefers agaves to other types of cacti or succulents. This frequently requires a pesticide drench over the top of the plant and drenching the rosette about three times; once each in April, May and June according to some growers in Arizona. The liquid is preferred for drenching.
Granular pesticides can be used but must be watered in around the plant and should be a systemic approved for grub control and applied about the same time as the liquid drench. The liquid drench has the advantage of killing newly hatched grubs from eggs laid in the bottom of the leaves in the rosette.
Posted by Xtremehort at 8:15 PM